Click the left mouse button to start the Dinosaur game

If you access the site from your phone or tablet, just press your finger on the game screen or touch the dinosaur.

Jump the dinosaur up using the left mouse button.

What is the Dinosaur game?

Dinosaur T-Rex Runner game - this is an engaging Dino game available to everyone. Here little T-Rex runs along the desert, dodges various obstacles, and collects points.

The arcade is relatively unsophisticated. It’s based on a area with cacti, flying pterodactyls, and boulders on the ground. There’s also a score counter above the Dino that urges you to keep playing. The more obstacles a player avoids successfully, the more complex levels open up. In addition, there is a specific feature in this runner. At certain moments it inverts colors. Apart from making the process more diverse, it may also distract a player. Be careful not to lose your focus at such a point. Оtherwise the game ends.

How to operate the T-Rex Dinosaur runner

Running the Dinosaur T-Rex game online is really easy. You just need to use a couple of keys. In order to start, press the Space button. It will make T Rex run and slowly gain speed. Whenever a cactus appears in front of Dino, use left mouse button or Space again to jump over it. Also, you can press the Up arrow on the keyboard, it’ll bring the same result.

Apart from cacti, the game contains another type of obstacle which is pterodactyls. They fly above Dino’s head, so it’s better to dunk before them. Use the Down arrow to make your animal bend and successfully avoid the flying dinosaurs.

For smartphone and tablet users with no Internet, Dino is even easier to manage. The game starts after you tap on the screen. The same action makes the carnivore jump.

If a needed action isn’t taken at the right moment, you crash into an obstacle. And the game is over. Therefore, it’s crucially important to apply all the concentration and dexterity you have. Besides, the speed continuously grows, so the level of difficulty increases over time. However, if you practice on a regular basis, it will be easier over time. Just dedicate some time to this game every day. As we already mentioned, the No Internet Dinosaur doesn’t require you to be offline. Therefore, it’s available to play at any moment during the day.

Although it’s possible to achieve great scores with Dino, completing the game isn’t an option. The developers deliberately made it overly difficult, so a human being isn’t able to win. Everything starts quite slowly, and you may think you can make it to the end. Nevertheless, at a certain moment, the runner develops immensely high speed, and the player loses. It doesn’t matter if you use the keyboard or screen-tapping, the game leaves no chances. Even special bots, who were taught to play it, haven’t ever come to finish. 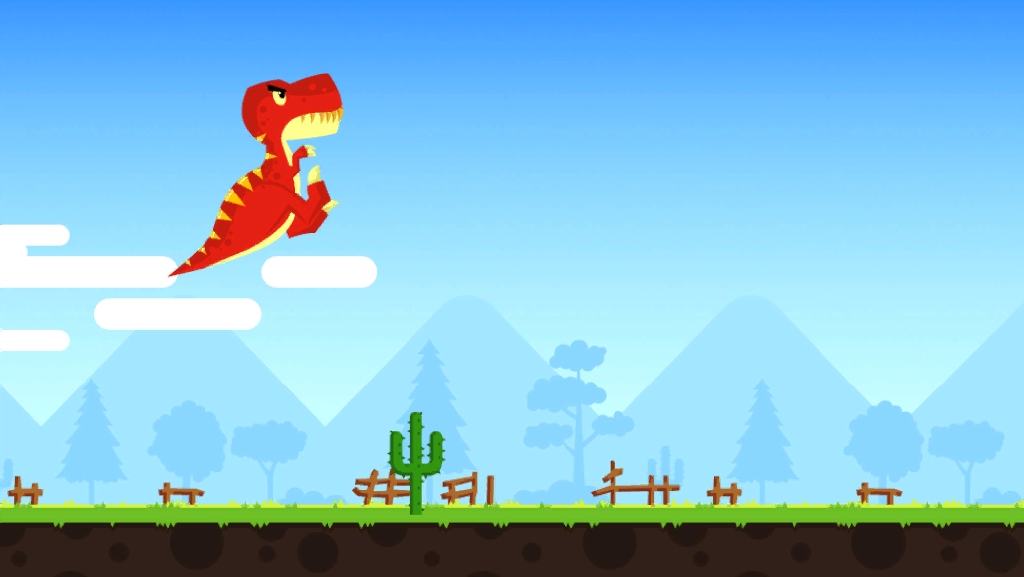 There is one trick everyone can use while playing T-Rex Dino on their device. Normally, we see a dinosaur moving along the desert. But it’s more efficient to imagine that the animal doesn’t actually move. Instead, the surrounding objects move toward it. Meanwhile, Dino stays in one place all the time. Once you accomplish this mind trick, your level of control is supposed to grow. That’s all about how you perceive the process.

Other than that, we recommend that you play for at least 5 minutes every day. This way your skills can grow faster. The good reaction will become an automatic habit that may help in setting a new record.

Are you looking for something reminiscent of Trex and games that are similar to that? There are loads of alternatives out there. For example, Google Dino games offer a variety of runners. Some of them clearly remind us of the original. While others have more changed details.

If you want to try different sprites with the same environment, here are the options. Some “T rex games” replace the dinosaur with Mario, Batman, Naruto, etc. There’s even a Squid game variation!

However, all those slightly alternated Dino games are missing one important point. They either require a network connection or pre-downloading. In case there’s no Internet, games like these are useless. And the original little dinosaur will be the only one to distract you. That’s why it stands out among all the competitors.

The Dinosaur Runner game - it’s always in your device ready to run along the desert and provide some fun. You can use this activity while waiting at the bus stop or riding the subway.

Dino Game is a convenient way to amuse yourself during a coffee break. It provides that essential dose of endorphins we all desperately need in the modern world. At the same time, the runner develops one’s ability to focus on the object. Which is a helpful skill you can apply in all aspects of life. To conclude, you can combine having fun and increasing mental capacities in this amazing game.

1Can I play the Dinosaur game?
Anyone can play it on any device. Whether you use a smartphone or personal computer, the Dino game is easily available. What’s more, it is free of charge and doesn’t require any downloading. Finally, you don’t even have to install Chrome web browser to launch the T-Rex runner. Just google the game by its name, and follow the links to enter the arcade.
2Does the dinosaur game have an ending?
The Dinosaur T-Rex runner has an ending. However, no one has ever reached it so far, including neural networks. The idea of the developers was to make the game gain speed over levels. So eventually, it becomes so fast that the dinosaur cannot jump at the right time. And it fails to avoid the obstacles at such an incredible pace.
3How do you prevent Dino Game hacking?
If you don’t want to hack it, don’t use cheat codes. There are a number of console commands making the dinosaur indestructible, jump higher, etc. With their help, you can also make the game display the scores you want. However, hacking quickly makes one lose any interest in the process. For that reason, we don’t recommend using them, at least in the beginning.
4How do you cheat in the Dinosaur runner?
In order to cheat, open the console first. For that, press the right mouse button somewhere on the page and pick “Inspect”. The developers' window will show up. Next, choose the tab that says “Console”. Now you may insert any cheat code found on the Internet for the T-Rex runner. Once it’s there, push “Enter”. The written command will be executed immediately.